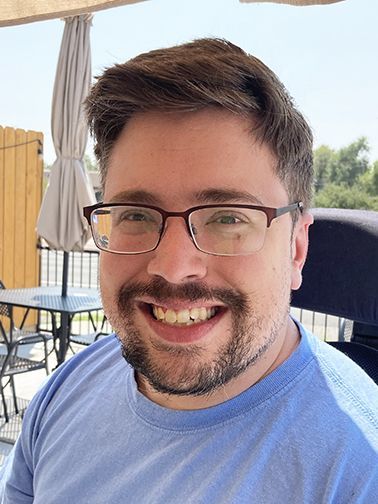 Forrest Merrill is not shy about being super powered. Although he doesn’t wear a cape, he’s equipped with exceptional abilities. He may not have a sidekick named Robin, but he has reliable allies who always have his back. He even has a fortress of solitude where he goes to recover from tough times and to recharge his powers.

His powers include courage. He’s not afraid to go into an unfamiliar situation and connect with new people who come to like him for who he is. They might even become his allies. His powers also include passion for life. He has found things in life that he loves and he seeks them out every chance he gets. One of his greatest powers is caring. Forrest cherishes his friends and reaches out if he senses one is in trouble. If a friend needed him, he wouldn’t hesitate to use his voice to help his friend feel cared for, or to engage the friend’s allies for additional support.

So maybe Forrest isn’t faster than a speeding bullet. Perhaps he’s unable to leap tall buildings in a single bound. It’s no matter, because he has identified his own individual powers, which are much more valuable. He would use his voice to encourage YOU to identify your powers, to establish a solid group of allies, and to create a fortress of solitude, even if it’s just a special corner of a room where you feel comfort and peace. We can learn a lot from Forrest—that we are ALL super-powered in our own way.